On the run from the mob, Suzanne discovers that hunky Jax is just the man she needs 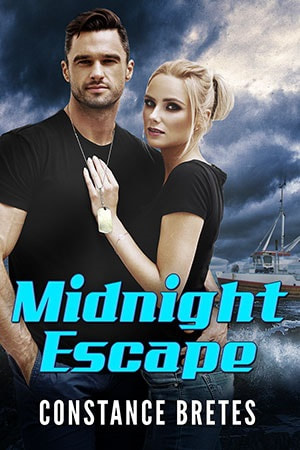 ​Suzanne Pacheco is on the run from the mob after witnessing a murder and helping to put the killer in prison. Her trip across the country brings her to a small town in Alaska. But once again the mob’s hitman has tracked her down. She’s disheartened at the thought of leaving the town she’s developed a real fondness for, but there’s nothing else she can do. Until she finds help in the unlikeliest of places and embarks on an adventure like never before.

Content Warning: contains some sexual content
BUY LINK
Check the video trailer on this book at https://www.kizoa.com/Movie-Maker/d299174821k1375425o1/midnight-escape
​Please NOTE: SUBSCRIBING TO MY MAILING LIST, YOU ARE AWARE THAT YOU WILL RECEIVE A NEWSLETTER ON THE 4TH OF EVERY MONTH, A RAFFLECOPTER REMINDER HALFWAY THROUGH THE MONTH, AND OCCASIONALLY, IF SOMETHING COMES UP IN THE MONTH THAT CAN'T WAIT UNTIL THE NEXT NEWSLETTER, I MAY SEND OUT A AN NOTE.
Website Copyright  © 2018 Constance Bretes